Celebrities Answer why did the chicken cross the road? 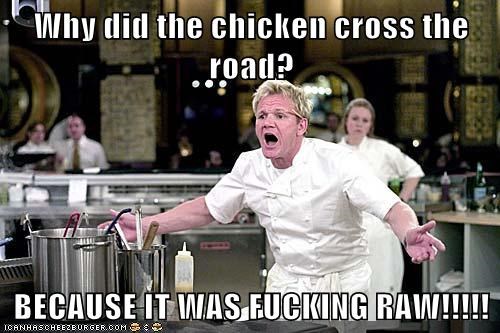 PAT BUCHANAN:
To steal a job from a decent, hardworking American.

ERNEST HEMINGWAY:
To die. In the rain.

MARTIN LUTHER KING, JR.:
I envision a world where all chickens will be free to cross roads without having their motives called into question.

JERRY FALWELL:
Because the chicken was gay! Isn’t it obvious? Can’t you people see the plain truth in front of your face? The chicken was going to the “other side.” That’s what “they” call it: the “other side.” Yes, my friends, that chicken is gay. And, if you eat that chicken, you will become gay too. I say we boycott all chickens until we sort out this abomination that the liberal media whitewashes with seemingly harmless phrases like “the other side.” That chicken should not be free to cross the road. It’s as plain and simple as that.

ARISTOTLE:
It is the nature of chickens to cross the road.

KARL MARX:
It was a historical inevitability.

SADAM HUSSEIN:
This was an unprovoked act of rebellion and we were quite justified in dropping 50 tons of nerve gas on it.

KEN STARR:
I intend to prove that the chicken crossed the road at the behest of the president of the United States of America in an effort to distract law enforcement officials and the
American public from the criminal wrongdoing our highest elected official has been trying to cover up. As a result, the chicken is just another pawn in the president’s ongoing and elaborate scheme to obstruct justice and undermine the rule of law. For that reason, my staff intends to offer the chicken unconditional immunity provided he co-operates fully with our investigation. Furthermore, the chicken will not be permitted to reach the other side of the road until our investigation and any Congressional follow-up investigations have been completed. (We also are investigating whether Sid
Blumenthal has leaked information to the Rev. Jerry Falwell, alleging the chicken to be homosexual in an effort to discredit any useful testimony the bird may have to offer, or at least to ruffle his feathers.)

CAPTAIN JAMES T. KIRK:
To boldly go where no chicken has gone before.

FOX MULDER:
You saw it cross the road with your own eyes. How many more chickens have to cross before you believe it?

FREUD:
The fact that you are at all concerned that the chicken crossed the road reveals your underlying sexual insecurity.

BILL GATES:
I have just released eChicken 98, which will not only cross roads, but will lay eggs, file your important documents, and balance your checkbook — and Internet Explorer is an inextricable part of eChicken.

EINSTEIN:
Did the chicken really cross the road or did the road move beneath the chicken?

BILL CLINTON:
I did not cross the road with THAT chicken. What do you mean by chicken? Could you define chicken please?

LOUIS FARRAKHAN:
The road, you will see, represents the black man. The chicken crossed the “black man” in order to trample him and keep him down.

THE BIBLE:
And God came down from the heavens, and He said unto the chicken, “Thou shalt cross the road.” And the chicken crossed the road, and there was much rejoicing.

COLONEL SANDERS:
I missed one?